Our seniors face a difficult away game at a Workington Reds side tonight who are resting many of their first team following a 2-1 win over Ashton United on Tuesday night.

Andrew Boyce’s side were worthy winners in the quarter-final against Whitehaven AFC which saw them finish the game 4-0 winners, the winners tonight will play against Penrith FC in May at Brunton Park in the final. 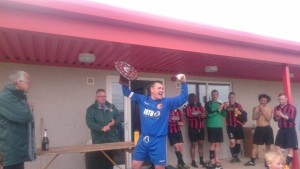 The Pirelli FC senior side is only in their third year but in that time they have been promoted twice by winning the third division and coming close runners-up in the second division of the Westmorland league.

With the team currently sitting in third place in Division One with three points between the top three and also having three games in hand, they will be looking to continue their cup run and keep up their good season.

A supporters bus has been put on tonight setting off from the Museum Pub in Carlisle at 18:00, costing £10.
Kick off is at 19:45 at Borough Park

Updates on the game will be provided by Paul Armstrong’s Live Scoreboard facility, via the Workington AFC website.