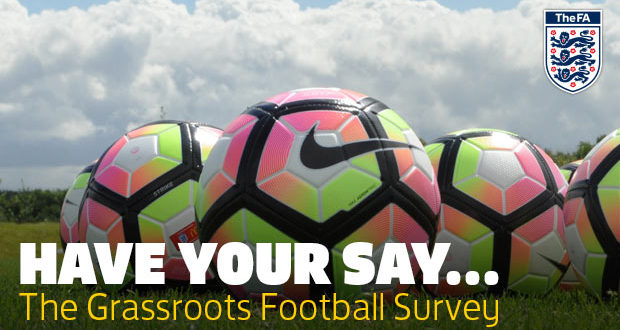 The FA has launched the 2016 Grassroots Football Survey, which will run from Monday 19 September until Friday 28 October.

In October 2015, more than 28,750 players, coaches, referees, staff and volunteers completed the inaugural online poll to assess public opinion around the grassroots game.

The results provided valuable feedback and revealed a number of positives, but also highlighted some areas for improvement.

Last year’s survey – the largest ever undertaken by The FA – saw 25 percent of respondents say they would play more if there were better facilities available to them, emphasising the fact that not everyone has access to adequate playing facilities.

The FA has committed to spending £260m on the grassroots game, with facilities being one of the key areas of focus.

The FA also learnt that only one in five coaches polled felt they were being supported in their development. Under the new grassroots coaching programme, there will be a network of county coaches tasked with improving and supporting coaching across grassroots football with club mentoring programmes.

This year’s survey will again aim to gather opinions from the players, coaches, referees, staff and volunteers that make up the 400,000-strong grassroots football workforce, to measure the progress The FA has made to date and to pinpoint areas that require focus going forward.

The 2016 Grassroots Football Survey can be completed here.