We’re looking for an individual to coach our girl’s football session which are due to start in Spring 2018, initially as an assistant and potentially progressing to coach when eligible members of the group will transition to participate in the Longhorn Youth League. You’ll be working alongside a licensed FA coach to deliver football training sessions within our girls’ section which include children from 5 up to 10 years old. The position is open to anyone 14+, with coaching and assistant roles being available to those 18 and 16 respectively due to our safeguarding policy. Anyone who is between 14 and 18 will be able to assist with the coaching and the Club will work with the Cumberland FA to attend the Football Futures programme. The position is a volunteer position and Club embroidered clothing will be provided upon completion of probationary period.

We’re looking for an individual with the following attributes:

As part of our recruitment process, the successful candidate will be subject to a full criminal record check carried out prior to engaging with the group unassisted which will be paid for by the Club.

No coaching experience is required, though desirable, as the Club will put the successful candidate through their Level 1 coaching course.

The Girls’ section of the club participate in local and national festivals throughout the season and also organise events to allow the girls to enjoy the social side of being part of our club. 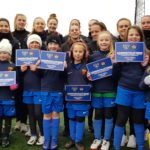 Participating in the Durham WFC festival of 2017 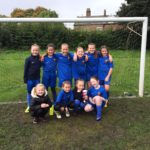 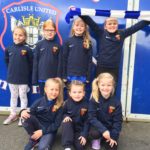 Pirelli FC is a Charter Standard club based on the Pirelli factory site on Dalston Road, Carlisle. The club consists of five youth teams involved in the Longhorn Youth League and our Senior team in Division One of the Smurfit Kappa Cumberland County League. During the 2016-17 season, we won the Charter Standard Club of the Year 2016 which was voted for by Cumberland FA for our hard work in expanding the club over the last five years. In the 2017/18 season, the girl’s section of the club became a Sister Club of WSL2 club Durham WFC. As part of this, each player is given a season ticket and also allocated a match to be player mascots & ball girls.

If you would like to know more about the position, please get in touch with us.